RV enthusiasts who spend a considerable time away from their home state may come to ponder if another state would be a better place to call home. This page gives an overview of the things to consider before and after deciding to change your legal state of residence, or state of [an error occurred while processing this directive], in legalese.

Changing state residency in the United States is a right we enjoy and there is nothing sinister about one’s desire to live in a state most inline with his goals, as long as no state is defrauded in the process.

Among RV dwellers, the primary reasons to change home state are:

What is a Resident and a Domiciliary?

DISCLAIMER: While we believe that all information on this web site is accurate, we can not guarantee that it is applicable to You specifically or to Your situation. More »

The word resident is well understood, but domiciliary is rarely used outside legal circles, so let’s take a brief look at both.

A state resident is a person living within the boundaries of a state, meeting certain criteria as defined by the state for receiving benefits and being subject to various forms of taxation. A resident may or may not consider the state his legal state of residence.

A domiciliary is a person claiming the state as the location of his fixed and permanent legal residence ([an error occurred while processing this directive]), and meeting certain criteria as defined by the state for the recognition of this status.

The difference between the two was explained well by the State of New York Court of Appeals:

It is important to know the difference between the two terms because you will see them in various contexts when dealing with states and other legal proceedings.

However, in informal conversations “resident” is used to mean either term. As such, the remainder of this page and most of this web site will use resident to refer to both cases, except where the difference is worth pointing out.

States, and even agencies within the same state, have different residency qualifications. Below is a list of the most common qualifications, but check with your new state to be certain.

The above is not a recipe on how to become a state resident. In certain cases a single item above may be sufficient for residency status; in other cases completing all may still not meet all requirements.

An important point to remember is that what you consider your home state may be different from a state’s view of your residency status.

A state will be eager to classify you as a resident to levy taxes and other fees upon you. For example, states that collect a considerable income from vehicle registrations will want you to re-register with them as quickly as possible.

On the other hand, it is in the state’s interest to classify you as a nonresident in order to deny you a tax-funded benefit. A good example are states that provide free or low-cost vehicle registration subsidized by other taxes, where you must meet more stringent requirements to be allowed to register a vehicle as a resident.

Keep the following points in mind:

Here is a great illustration of varying residency criteria, as seen on the Alaska election web site (August 2005):

You are a resident for voting purposes if you are in Alaska with the intent to remain here and have the intent to return when you leave, and are not registered to vote in another state or are willing to cancel that registration. This does not mean that you meet residency requirements for other state agencies and programs. Other agencies or organizations can have different criteria to define Alaska residency.

To avoid residency issues, do a clean break from your previous state, preferably at the end of a calendar year to avoid income tax complications.

What is a clean break? It is the intention to change state residency and severing all relevant official ties with the previous state. This action is feasible for people completely moving out of the state and fulltimers.

To sever relevant official ties with a state, you:

For many RV operators a clean break is not feasible and ties to multiple states must be maintained. This in itself is not a problem as long as you take care not to defraud the states. Multiple ties may also complicate other aspects of your life, such as paying taxes, so be prepared to dedicate time to the proper handling of these responsibilities.

Below are some points to consider by those who wish to change home state, but need to maintain significant ties with the old state. These lists are intended as guides to help you avoid charges of fraud; however, they are by no means comprehensive.

A Case to Consider

For those who plan on maintaining residences in the old and new states, it would be worth a few minutes of your time to review the case of a snowbird couple transitioning from New York to Florida, who have been denied their petition for property tax refund based on residency status. There is no indication that a recreational vehicle was involved, but it is still relevant to the topic at hand.

DISCLAIMER: While we believe that all information on this web site is accurate, we can not guarantee that it is applicable to You specifically or to Your situation. More »

The official document can be found here: State of NY, Determination No. 817952

Our interest in the above determination is not the legal aspects of the case, rather the items considered for determining residency. A few points of interest from the determination:

Could this case have been overturned on appeal? Perhaps, but it provides lessons to the RV community in how to avoid common pitfalls while maintaining ties with more than one state

Whether you call it home base, state of residence, or state of mind, all RV travelers have a home state with which business must be conducted in various official capacities.

The longer you are away, the more likely you will have to transact business remotely with various state departments. Among RVers, fulltimers and snowbirds fall into this category most often, being absent from their home state for extended lengths of time.

Fortunately, states are making this process easier by offering many services over the Internet, phone, and mail. Transactions most commonly needed by RV owners are:

The following table lists websites for commonly used services offered by the fifty states and D.C. 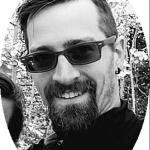 Andy Herrick is a blogging nerd, #8 Enneagram, wannabe bread baker, INTJ, RV industry professional, and small business entrepreneur. He can be found hanging out with his lovely wife and family, skiing, cycling, climbing, hiking, and convincing anyone who will listen why dogs aren’t really that great of pets. Also, he runs this website. Rent an RV!
Rent at RVShare
Rent at RVnGo
Rent at RVEzy
Rent at Outdoorsy
Recent Posts
There’s a Rodent in my Rig! – VanLifers Share How to Get Rid of Mice in Their Campers
How to Make Coffee While Van Camping (Without Fire)
Please Welcome Wayfinding Wheels!
Guide to Camping Off-Grid with a CPAP Machine
5 Van Build Mistakes I Made That You Can Avoid In Your Build
15 Insider Tips For A Zero-Waste Van Life
Reading Recommendations
The Big, Fat Guide to RV Storage – Sites, P2P, Covers, Carports and More! 23 Van Life Essentials for Personal Safety On the Road